One theme that continues to hold true throughout the process of evaluating this wide receiver group: Day 2 will be loaded with potential longtime NFL players. You can argue that the top of this class isn’t filled with high-end No. 1 wideouts; it’s a fair point to raise, but there’s no getting around how many quality future contributors exist in this crop.

Among that group is Western Kentucky’s Taywan Taylor. The compact 5-foot-11, 203-pound wideout enters the NFL coming off back-to-back 17-touchdown seasons, with 1,467 and 1,730 yards in each. He’s a proven big play threat, popping off over 17 yards per reception over the last two years. Taylor backed up his explosive ability by running a 4.5 in the 40-yard dash, and shining in the three-cone drill and broad jump.

Taywan Taylor often goes undiscussed among the group of top-10 wide receivers in the 2017 NFL Draft, but his Reception Perception begs us to believe that he belongs up there. He’s an easy prospect to like.

Throughout this series, we’ve made it a point to note when a wide receiver played on one side of the field at an extraordinary rate. Taywan Taylor falls into this category. The Western Kentucky senior took a whopping 82.5 percent of the snaps logged in his Reception Perception sample on the right side of the field.

Taylor did experiment some with playing inside, taking 14.6 percent of his snaps from the slot. Otherwise, he rarely played outside left (1.6 percent) or lined up in the backfield (1.3 percent). While mostly operating at right wideout, Taylor alternated between the flanker and split end positions, with 57.4 percent of his snaps coming behind the line of scrimmage and 42.6 percent on the line. 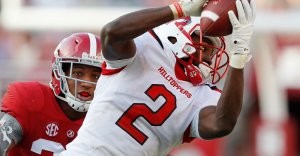 While it’s nice to see Taylor have experience lining up at all three receiver positions, given what we know in a limited sample size of players who primarily played on one side of the field in college, it’s fair to have questions about his ability to translate right away as a rookie. The fact that he played at such a low-level of competition does not ease worries.

However, it’s encouraging that Taylor was the clear engine of his team’s passing game. A true target hog when he was on the field, Taylor saw a pass go his way on 36 percent of his routes run over the sampled games. He didn’t waste opportunities in posting a 68.5 catch rate, as well.

Taywan Taylor’s athletic ability is apparent when watching him and he helped underscore that with his performance at the NFL Scouting Combine. He tested in the 81st percentile for NFL athletes in SPARQ, per Three Sigma Athlete. Those players, especially smaller shifty ones, have something of an advantage when it comes to earning separation. Yet, strong understanding of timing will always be the biggest assist. Reception Perception shows that Taylor has plenty of both.

With a 73.4 percent success rate vs. man coverage, Taylor falls along the 74th percentile among prospects charted over the last two seasons. Taylor’s score also proved the fifth-best among receivers in the 2017 draft.

An easy and natural separator, Taylor is a chore to cover one on one. Plenty of agility integrated into his well-timed cuts make him a difficult task for opposing corners. Truth be told, he’s still something of a work in progress technique-wise, but shows just enough ability when mixed with his physical traits to win at the college level. Taylor only saw limited reps against press coverage, with 33 attempts overall. Yet, his success rate of 75.8 percent was a stellar result. It was the third-best in this class, trailing only Carlos Henderson and Isaiah Ford.

Unlike his work against man and press coverage, Taylor came in under the Reception Perception average with a 75.7 percent success rate facing zones. While not a painfully poor score, falling in the 45th percentile, it’s possible that Taylor’s touch and go technique influenced his zone success rate.

It’s hard to imagine Taylor not finding some role in the NFL and proving a successful long term asset. However, if he does indeed hone the craftsman portion of the game and his technical prowess does not wane drive-to-drive, there’s a path to a high-end starter ready for him to walk.

We clearly see Taywan Taylor’s overall success rate vs. coverage scores paint the picture of a player who has a solid NFL future down the line. In breaking his scores down on a route-by-route basis, the full image of how he wins as a receiver comes into focus. 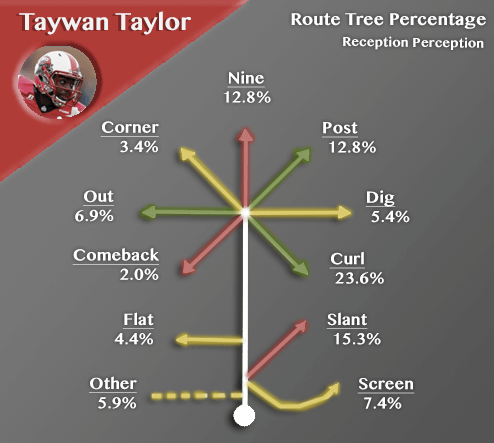 The three routes that Taylor ran at an above average rate were the post, curl and out. The curl is of particular note, as it is often one of the key patterns to capitalizing in the short game for traditional deep threats. With the ability to earn cushion or additional space due to their vertical ability, speed receivers can assist their quarterback with the benefit of easy chunk throws with high usage on curl routes.

In terms of the vertical game, it’s rather surprising to see Taylor check in with just 12.8 percent of his charted routes falling under the “nine” branch. Perhaps Western Kentucky was less inclined to use him on straight-line deep routes due to a lack of confidence their passers could hit those throws, because Taylor’s speed should be respected on such a route.

Overall, Taylor’s route tree percentage chart is one of the more balanced in the class, with five branches checking within the two-year prospect average. Perhaps that catches some by surprise due to the level of conference he played in, but Taylor has experience executing a variety of route concepts. With that in mind, his success rate chart becomes that much more impressive. 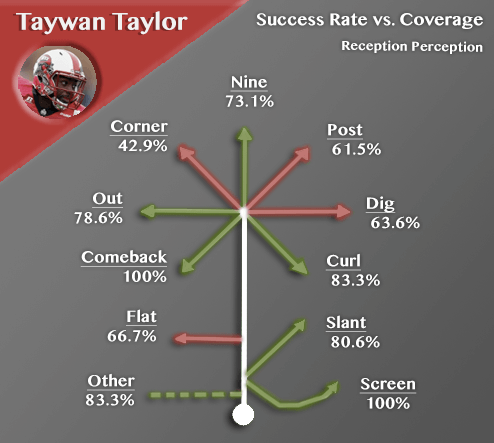 Again, speaking to the curl route, this particular concept came with his highest success rate vs. coverage score at 83.3 percent. Taylor certainly shows the ability to sell the vertical pattern before snapping back to face his signal caller. His performance on the curl, in addition to a strong 80.6 percent success rate on slant routes will unlock the short and intermediate sections of the field in addition to what he can offer in the deep portions.

It does appear that Western Kentucky left something on the table when it comes to Taylor’s ability as a straight-line vertical threat. Despite running the nine-route at a below average clip, Taylor’s 73.1 percent success rate checks in above the 90th percentile. His NFL team will no doubt find him more useful as a vertical playmaker than even his collegiate squad, where he already averaged over 16 yards per reception in his time with the program.

We did note that Taylor has some work to do as a technician and the routes in which he has some of his worst success rates exemplify that issue. The post, curl, and dig all check in below the two-year prospect average. The dig is a route that requires pristine footwork and consistency to earn separation when in one-on-one coverage. There’s work left to do for Taylor on that pattern. The diminutive receiver could also serve himself well by adding a repertoire of head fakes to his arsenal to leave cornerbacks hesitating at the breakpoint of the corners and posts.

Should Taylor, in time, iron out some of the detail-level concerns, we may well have a complete receiver on out hands. His performance on the nuanced out route—not to be overlooked considering his route percentage was over the class average—gives hope that more technical acumen is within his range of outcomes.

While you’d expect a player of Taywan Taylor’s build and profile to be a dynamo after the catch but weak in traffic, the Senior wideout proves almost the opposite. Taylor was “in space” on 12.3 percent of his routes, which is above the two-year charted average. He broke a single tackle on just 40 percent of those plays, which is a below average rate. Taylor won’t consistently make the first defender miss and he went down on first contact on 48 percent of his attempts. However, he does have the ability to break long runs after the catch, as his multiple broken tackle rate of 12 percent is above the two-year prospect average. 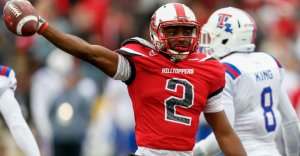 While he checks in as solid if unspectacular after the catch, Taylor is one of the top prospects in traffic. Despite being under 6-foot-0, Taylor’s 76.9 contested catch conversion rate falls along the 87th percentile among Reception Perception draft prospects. Weight and arm length can often be more important for receivers than height when winning the ball in the air, and Taylor checks in at the 54th and 68th percentile, respectively, for both, per Mockdraftable.

Yet, while physical traits can be an asset in the contested catch game, mindset and mentality are often the trump cards for shorter receivers. Taylor has that aggressive approach in spaces and it’s one of the primary reasons he is a “small receiver who plays big.”

Again, that’s not what we’d expect from a receiver of Taywan Taylor’s perceived archetpye, but that’s why studying how a player actually plays on film will forever be important. We must always be open to expecting the unexpected.

Plenty of prospects offer intrigue on the second day of the draft. So much so that it feels as if Taywan Taylor just doesn’t get his proper due. Everything in his Reception Perception profile speaks to a wide receiver who will translate to the pro game, and have a long successful career as a rotational player, at worst. If he enjoyed a Torrey Smith-like career, no one should be surprised.

Of course, we also see with a pristine success rate vs. man and press coverage, in conjunction with a stellar contested catch conversion rate, that perhaps there’s more of a star-studded path for Taylor to stroll down. Should he land with the proper team we could see a situation much like what unfolded with T.Y. Hilton a few years back come to pass.

The former Florida international star went in the third-round of the NFL draft with little fanfare back in 2012. Through years of a symbiotic relationship developing alongside his excellent quarterback, Hilton eventually grew his talents into that of a top target on his offense. Naturally, this is an aggressive projection for the career of Taywan Taylor. Nevertheless, Reception Perception indicates through several of its key metrics that it is a destiny Taylor could certainly fulfill.

If you’re interested in more Reception Perception analysis, make sure to visit our Reception Perception pages for college prospect evaluations and pre-order The Ultimate Draft Kit for access to 50 NFL players’ full data this summer. You can keep up with all of the work using the #ReceptionPerception hashtag on Twitter.