By Lauren Carpenter / @stepmomlauren / May 31, 2019
Subscribe and Watch Full Episodes

The 2019 Ultimate Draft Kit officially drops this Saturday, June 1st.  Referred to as the UDK, this year’s draft kit is full of exclusive content, rankings, profiles, and tons of other helpful tools and information at your fingertips.  The most common question the Ballers are asked each year is how can we fantasy players use the draft kit effectively for our leagues.

In the most recent episode of The Fantasy Footballers, hosts Andy, Mike, and Jason discuss this year’s Ultimate Draft Kit and highlight some amazing features and how to use them to dominate your league. This is by no means an exhaustive list of tools at your disposal in the UDK, but the Ballers highlight six special features and discuss how to interpret the data to make the most of your draft day.

Market Share Reports take a unique approach at evaluating a player’s carries and reception numbers compared to their team’s totals.  Looking at a player within the framework of their own offense can give us insight on how a player could perform in the future within that same offense.

Take Kenyan Drake for example.  Last year, Drake had only 34% of the total RB yards, yet was the second leading receiver with 78% of the team’s RB receiving yards.  With Frank Gore gone, that leaves a mountain of opportunity for either Drake or Kalen Ballage to increase their ground production.  While the new head coach Brian Flores is committed to giving all of his backs the opportunity to take a lead role, Drake shows the potential in both the run game as well as continuing to dominate in the passing game.

You can look at this Market Share Report on Drake as a chance to get an explosive running back for a discounted price in the draft.  Additionally, this data suggests Ballage could be a sleeper to keep an eye out for around in the 14th Round of the draft or even snagging off of the waiver wire.

You can also use the report with a different lens.  Peyton Barber’s numbers suggest he was a workhorse on the Buccaneers’ offense with 61% of the teams RB fantasy points and 83% of the RB yards.  These numbers place him among heavy hitters where he doesn’t belong.  Corey Davis had the 7th highest target percentage with 25.9% and the 9th highest number for the percentage of the Titan’s total WR yards.  However, he only had 4 top 24 weeks all year.

With Barber and Davis’ Market Share Report, you have to ask yourself if these numbers are really where the team is trending next year and if they can get better or be sustainable.  With Ronald Jones emerging in the offseason, Barber has no place to go except down and Davis is in an offense that is a heavy-hitting, run-first team with a mediocre quarterback.

You can use the Market Share Report data as a way to predict potential volume booms as well as busts for players within their own offense.

Considering a player’s strength of schedule has been debated in terms of fantasy production for a long time with valid points both for and against.  It’s not the most “sticky” statistic available, however, Jason uses the Strength of Schedule feature of the UDK to draft fantasy defenses to start in the early weeks of the season.

Why is this important?  We all know there are some dominant fantasy defenses/special teams like the Bears and the Vikings.  But, Minnesota takes on the fantasy-prolific Atlanta Falcons in week 1 and then the Green Bay Packers in week 2.  When you can easily stream a defense on a week to week basis, drafting and starting the Vikings early could be a disaster.

Now, let’s look at the flip-side of the Strength of Schedule feature.  The Cowboys have a decent defense, not amazing, not terrible, but they start the season against the O’dell-Beckham-Jr.-less Giants and then face the Redskins who have a shaky offense at best.  Taking the Cowboys late, or even picking them up off the waiver wire before the season starts could help secure early victories with your defenses/special teams.

Matt Harmon of Yahoo! Fantasy Sports compiles a mountain of data into an easy-to-understand report he calls the Reception Perception.  We have heard of the “eyeball” test where you just know that player is fast, runs great routes, etc.  Reception Perception gives you hard data to validate those gut feelings and tells us how good a wide receiver actually is independent of his quarterback.  This is invaluable information that you cannot find anywhere else.   The Ultimate Draft Kit is the exclusive home of Reception Perception.

While Reception Perception has all kinds of data to review, Mike breaks down some key players that stand out to him based on their ability to create separation.  Much to Jason’s chagrin, that first player is the Steelers’ JuJu Smith-Schuster.

Now that Antonio Brown is gone, it is a no-brainer that Smith-Schuster will see an increase in his target volume as well as an increase in his total touchdowns.  71% of his TDs came inside the red zone where Brown only had 46%.  That tells us that Brown scored a majority of his TDs outside of the red zone on big plays.  The number one question for Smith-Schuster is whether or not he can fulfill the void created by Brown’s departure. 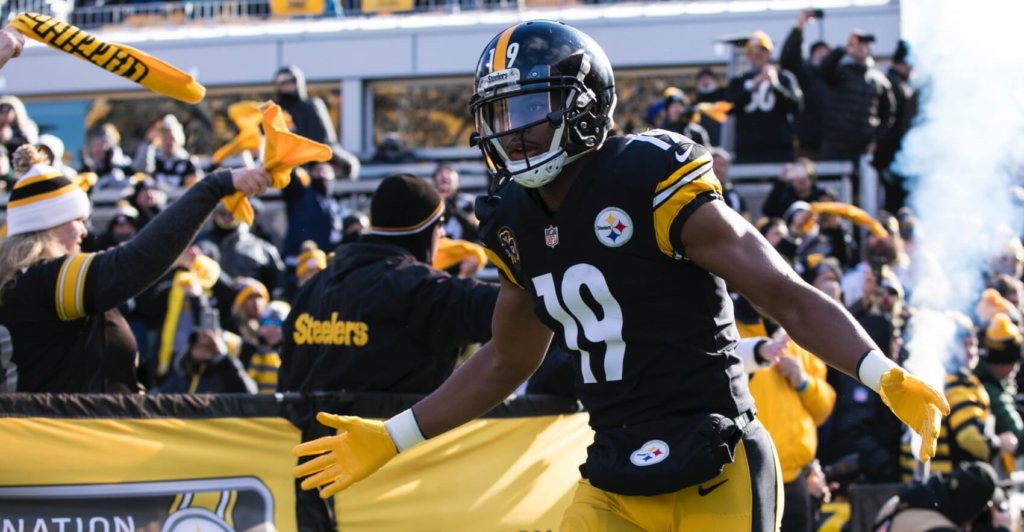 Unfortunately, the data suggests, not yet.   His ability to create separation on short routes contributed to his TD total in the red zone but those were not on big deep plays, where Brown typically dominated.   His ability to create separation on intermediate and deep passes was considerably lacking compared to his short routes, which Harmon details in his Reception Perception.

There is no doubt that he will be a fantasy star again this year, but understanding this concept is something very important to keep in mind.  Don’t forget that Donte Moncrief, who is known for deep plays, has been added to the roster this season and may contribute in that deep threat passing game.  He is also a player you can acquire on the cheap with data to back up his potential in Pittsburgh.

The Reception Perception is also great for evaluating which wide receiver you would like to target on a given team such as D.J. Moore or Curtis Samuel.  Moore may seem like the hotter name in the Panthers’ offense, but the Reception Perception shows that Samuel, who Harmon likened to an early Stefon Diggs, has the more explosive ability to create separation and runs more dynamic routes.

The New York Jets’ Robby Anderson is another player that Mike highlights as a stand out based on this data.  Now that the “quarterback whisperer” Adam Gase is in charge of the offense, Aaron Darnold is poised to take a huge step forward after his rookie year.  Ergo, deep-threat Anderson could emerge as a dominant wide receiver in fantasy that you can get for a relatively cheap draft price.

The Red Zone report, specifically inside the 10-yard-line, is incredibly useful when it comes to evaluating RBs’ red zone potential.  We all want a touchdown machine and this report can help clarify who will continue from last year and who has the potential to rise into that position on your squad.

Kamara owned the 10-yard line for the New Orleans Saints with 33 attempts and ten TDs, both were 2nd leading in the NFL.  Many thought Ingram may usurp that role upon his return from suspension, but Kamara was simply too good.  With Ingram gone and Latavius Murray in his place, Kamara will continue to dominate within 10s this season.

When it comes to wide receivers, Davante Adams had more than twice as many red zone targets as Mike Evans with 31 compared to 14.  In fact, Evans had only six total red-zone receptions last year.  To give some perspective, Michael Thomas had 24.

Under the new Bruce Arians-led offense and Jameis Winston, Evans should see a rise in his red zone targets, receptions, and therefore touchdowns this year.  After all, he had fewer red zone receptions than Josh Reynolds.  Evans is an explosive, large, and talented WR1 who was under-utilized last year.

As the brain-child of producer Brooks, the Consistency Chart is unlike any other tool you can find that covers the number of boom/bust weeks a player had.  The chart is easy to follow, with color coordinated data to help you uncover interesting trends about a player’s future.

For example, we all know that Tom Brady is the G.O.A.T. in terms of real-life football.  Many people will roll this idea over into the fantasy world when it doesn’t translate quite the same.  Brady only had two Top-12 performances last year despite leading the Patriots to a Super Bowl victory.

You can also look at players like O.J. Howard, who was out for several games due to injury, in a different light.  He finished as a Top-12 tight end more often than players like Zach Ertz, George Kittle, and Eric Ebron.  Sometimes we can forget about a player’s fantasy production and consistency if they miss time on the field.  This chart will help clarify some truths about positional players by taking a bird’s eye view of the data on a week-to-week basis.

Unlike the other tools and features highlighted in this article, the Tier Breakdowns is something you can use during your actual draft.  It is an essential list of players grouped into “tiers” that are not primarily influenced by rankings or average draft position. 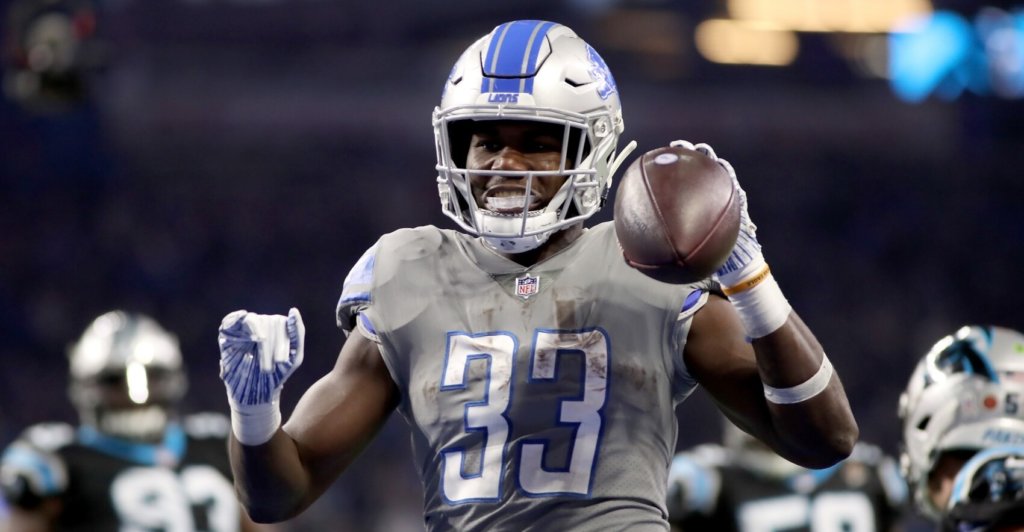 In fact, what makes the Tier Breakdowns so helpful and unique is that it separates you from a player’s name value and ADP, giving you a better perspective on who to take and when. When creating the Tier Breakdowns, all the positional players are put into “buckets”, as Mike calls it.  These buckets represent a tier, which means all of those players within that tier/bucket will score very similar points to each other regardless of position, rank, or ADP.

One way this feature is so helpful is to keep you from going through the dreaded draft tilt if you miss a player you had your eye on.  Let’s say the guy you wanted gets picked up right before your turn.  Instead of freaking out and making several bad draft picks in a row, simply check your tier breakdown and see which other players in the same tier are still available to draft.

Another way to use Tier Breakdowns is recognizing significant fantasy value that will most likely be available in the later rounds of your draft.  Robby Anderson, for example, is in Tier 6.  Other players in that same tier are being drafted in the 5th and 6th rounds, but you can get Anderson, who is in the same tier and therefore should have similar point production, well into the 8th round of the draft.

As previously mentioned, there are so many more useful tools and data included with the UDK than just described above.  Some new features this year include customized scoring based on your league settings which automatically update the Tier Breakdowns and you can take the UDK on the go with the new mobile app, just to name a few.

Are you into daily fantasy?  Don’t miss out on the combo pack of the UDK and the DFS Pass!  New in this year’s DFS Pass includes options like a LineUp Generator.