Introduction to the 2019 Reception Perception Project

Editor’s Note: Get the full breakdown of Harmon’s Reception Perception results the top-50 WRs in the Ultimate Draft Kit. Also, check out the full archive of his 2019 rookie WR pre-draft evaluations and NFL player comparisons.

With the 2019 season squarely on the horizon, it’s time to begin our preparation for the coming NFL campaign (as if we ever stop doing that). The wide receiver position is one of the most fascinating positions to study, debate and try to understand in the modern NFL. Teams are passing more than ever and it’s this sector of the game that often determines success. Wide receiver is one of the primary engines to that end. The reality that the position is seemingly more flush with tremendous players than at any point in the history of the sport only makes evaluating this position all the more enjoyable.

My primary tool in executing this task, at least for the wide receiver position, is a charting methodology I developed over five years ago called “Reception Perception.” The methodology charts a wide receiver’s performance on every route run during an eight-game sample for NFL receivers.

In years past, Reception Perception helped show that Odell Beckham was winning at an elite level before “the catch” in his rookie year and that Allen Robinson would experience a massive breakout prior to his 14-touchdown 2015 season. When most were ready to leave Michael Crabtree for dead when he hit free agency, Reception Perception indicated that the veteran receiver could thrive in a new home. The results of the data also begged us not to give up on Tyler Lockett, who just enjoyed one of the most wildly efficient seasons by a receiver we’ve seen in years.

Now, it must be noted that the results of Reception Perception aren’t always indicative of statistical success. There have been many players who show positively in the methodology’s metrics that do not go on to put up big raw numbers. Frankly, I’ve never intended the series to be one that is solely predictive of future events. Rather, I believe the purpose of Reception Perception and the data that comes out of it, is to bring an unparalleled understanding of how a wide receiver performs beyond the box score, and independent of the influence of outside factors, like quarterback play. Wide receivers are becoming a more specialized position as the years go on. Reception Perception can help break down their skills further than any other analytics or film-based tool to help classify what “type” of wide receiver each college prospect or pro player is.

-How good of a route-runner is this receiver and on which patterns does he create the most separation?
-Where does this receiver “win” on the field and what are his best attributes?
-What kind of coverage foils this wideout and is there a role he best fits in?
-Is this receiver capable of excelling if tasked with a greater workload?

These are the questions I believe Reception Perception helps us answer and the ones I care most about understanding. The goal is to provide unique data and information about NFL Draft prospects and current pro wide receivers. I believe more information is always powerful. Reception Perception is just one evaluation tool in a litany of those available to football observers. I’d caution readers against following the words of any analyst who believes their method is anything but just one piece of the puzzle. Yet, I do believe this particular tool is a tremendously useful one.

Now that Reception Perception is in its third season of a partnership with The Fantasy Footballers, the series is able to provide more of that unique information on a wider variety of players than ever before.

Route Percentage – how often a receiver runs each pattern on the route tree.

Success Rate vs. Coverage scores – how often a receiver gets open against the defenders covering him. A success is charted when a receiver “gets open” against the coverage. Creating separation, enough for the quarterback to have a reasonable target, is marked as a success. The only plays that are automatically given as success to the receiver are instances where a receiver is obviously held or interfered with (called or not). These plays make a big difference to an offense, and signify a receiver winning yards for his team by forcing the defensive back to hold him.

There are five formats for Success Rate vs. Coverage scores:

Alignment Data – charting where a receiver lined up on each snap (slot, outside right, outside left or in the backfield), and whether they were on the line of scrimmage or not.

Target Data – fairly self-explanatory, but we go beyond just raw targets, receptions and catch rate. Reception Perception tracks how many times a receiver was targeted per route run, and how many routes they caught a pass on. This shows true involvement in the offense. The series also features a drop rate.

Contested catch conversion rate – how often a receiver successfully catches a pass where he is in traffic and has to leave his feet.

In space metrics – how often a receiver gets an opportunity to run in the open field and how often they get dropped on first contact, breaks a tackle, or breaks multiple tackles on those plays.

Within Reception Perception, there are two main graphics that help illustrate the metrics, both of which received yet another a facelift this offseason. We’ll take a look at the route charts of Reception Perception favorite Stefon Diggs of the Minnesota Vikings, as an example.

Here’s is Diggs’ Route Percentage chart from his 2018 season, showing how often he ran each route on the route tree in his Reception Perception sample: 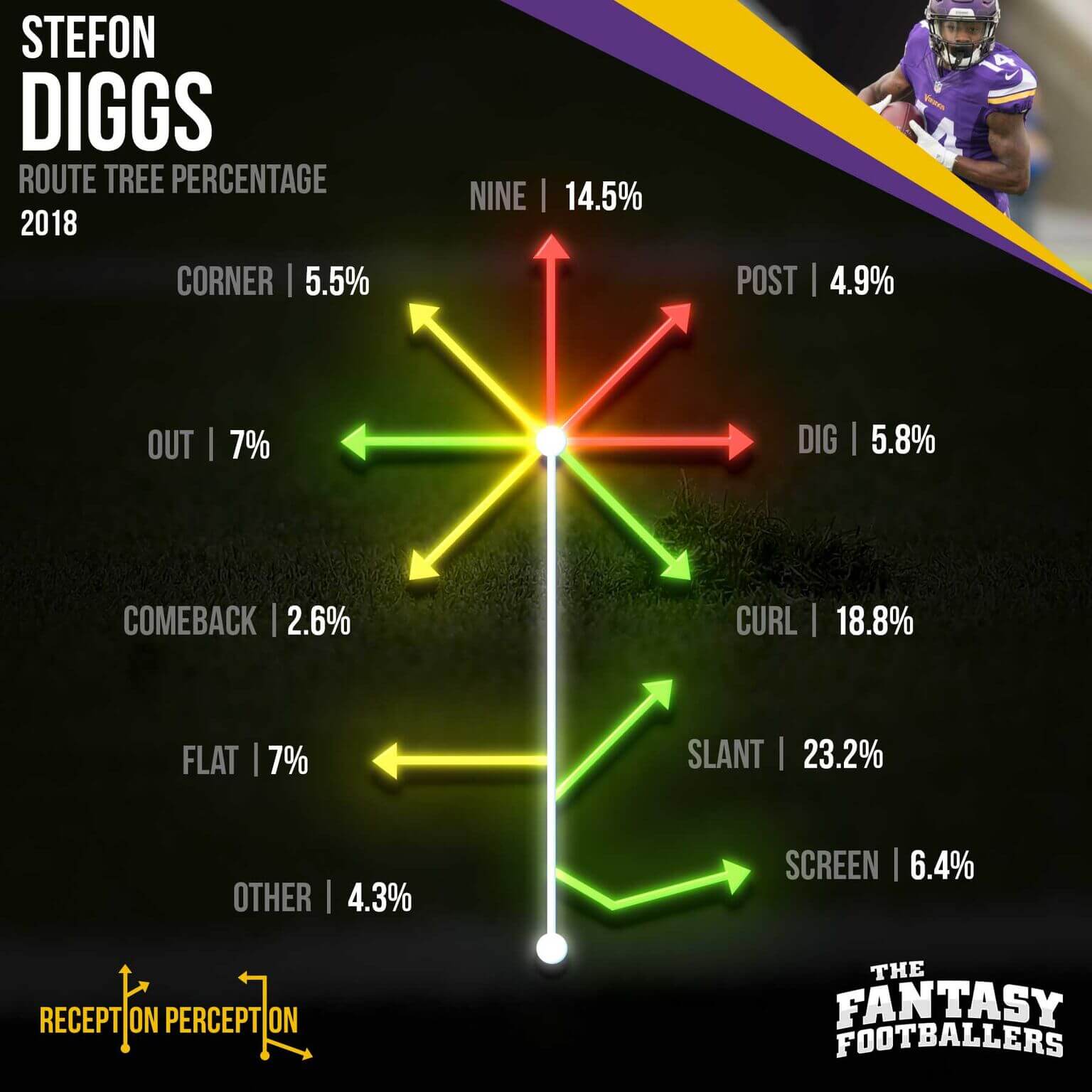 In addition to the new look, readers now get more context from the chart than ever before. The routes are highlighted to show how often a receiver runs a particular pattern compared to the historical NFL or college prospect Reception Perception averages.

Here’s how you’d use this chart: One interesting takeaway from Diggs’ chart is the lack of deep patterns. Both the nine and post route came in under the NFL average, in addition to a primary intermediate route in the dig. We know that Minnesota struggled with pass protection throughout the 2018 season. As such, they had to play more of a small-ball brand of offense than their collection of wideouts would suggest. Perhaps, with better offensive line play, we might see Diggs’ vertical game more unlocked in the coming seasons.

Here is Diggs’ Success Rate vs. Coverage route chart from his 2018 season, showing how often he got open on each individual pattern on the route tree in his Reception Perception sample: 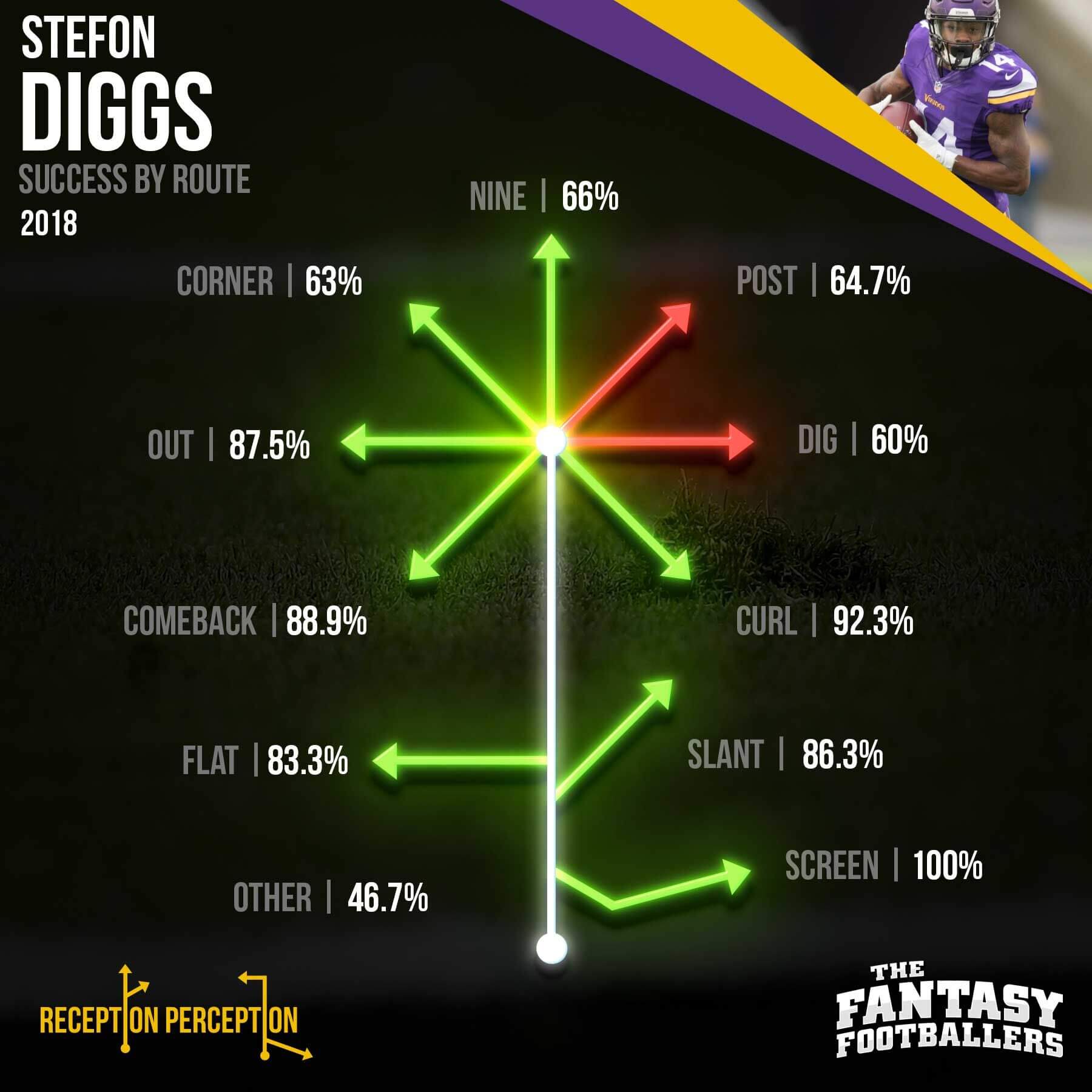 The same new context is provided on the success rate chart with the highlights to show how the player’s Success Rate vs. Coverage score compares to historical NFL or college prospect averages collected by Reception Perception.

Here’s how you’d use this chart: The strength of Stefon Diggs’ game is perfectly highlighted by Reception Perception. He is one of the two or three absolute best route-runners playing the wide receiver position today. After leading all receivers charted for Reception Perception in 2017 with a 78.7 percent success rate vs. man coverage, Stefon Diggs checked in at 77.2 percent in 2018, a 97th percentile score. He even improved his success rates vs. press from 75.5 percent to 77.1 percent. Diggs is clearly one of the best separators in the game and Reception Perception shows us he can get open at all levels of the field. He has the talent of an elite wide receiver.

If you have questions about Reception Perception, please contact me on Twitter @MattHarmon_BYB, or through my email ([email protected]). Any comments, feedback or critiques are appreciated.

By partnering with The Fantasy Footballers, I believe that Reception Perception has reached a new set of readers while giving out more content and data on a wider berth of players than in any of the previous three years of the series’ existence. The decision to house the series here was made with the reader right at the forefront of priority. I will now be able to produce a higher volume of content and in a more clear and organized fashion than I ever possibly could have on my own.

With that out of the way, here is a layout of what you can expect from the series this offseason:

So, there you have it; a sample of the wide array of data you get by following Reception Perception. Make sure to use the #ReceptionPerception hashtag on Twitter so you follow along with the series, and be ready for an unprecedented amount of content and findings from the methodology this offseason.