Fantasy Football: The Path to a WR1 Season Primer for 2019

Editor’s Note: Get player profiles and Matt Harmon’s Reception Perception data on all of the top-50 fantasy WRs in the Ultimate Draft Kit.

This is now our third year continuing the “Path to WR1” series examining WRs who are currently ranked outside of the top-15 receivers in Andy, Mike, and Jason’s initial WR rankings. The goal is to give some reasoning and definition to our methodology in determining the likelihood of a top-12 fantasy season from various prospective WRs. Our team of writers will be hypothesizing about players that possibly have a shot at finishing the year as a WR1.

Last year our series identified some superb potential WR1 values including Tyreek Hill, THE WR1 in fantasy. Let us be clear: we are NOT projecting a WR1 end of the year total; instead, we are merely giving the high-end of the range of outcomes for players to show what type of ceiling is in the realm of possibilities. We poll our team of writers and take the consensus percentage of whether that WR is capable of churning out a WR1 season.

Each of these WRs brings a bit of optimism for 2019 and our job is simply to lay out the “path” to a top-12 finish. This journey ultimately comes down to projecting their target share, depth of those targets, receptions, yards, and TDs for the upcoming season. All of these statistical categories are defined and explained in this article.

Predicting a Range of Outcomes

Whether people like to admit it or not, projecting fantasy point totals is a guessing game. We forecast usage while also acknowledging the fact that we don’t have all the info. In 2018, there were 18 new offensive coordinators with either new responsibilities or new teams. In other words, there were AT LEAST 18 offensive situations where predicting player usage had to be met with humility.

When we are talking about a “range of outcomes”, to put it plainly, we’re seeking what’s the best and worst scenarios available for a given player in 2018. We’re finding a player’s ceiling and floor probabilities. There can be volatility for every single player (see DeAndre Hopkins 2016) especially when we consider all the different factors involved for a position that needs another to even give them an opportunity to contribute in fantasy. WRs are co-dependent on QBs. We also must maintain that none of this can be done in a vacuum as projecting one player’s ceiling can also forecast doom and gloom on a fellow teammate. For instance, if you’re projecting someone like Allen Robinson to sneak into the WR1 territory in 2019, it inevitably must have an effect on his Bears teammates.

The goal in exploring a range of outcomes (and in this case the high-end), is to see how likely a WR can meet or exceed their draft position. That is how you spot draft values and how swinging for the fences and cashing in on the right player’s ceiling can win you a league.

Laying Down the Path

Let’s go into the why behind what we will be discussing in each WR1 profile.

Target Share- The target share, also known as market share, reveals a team’s total passing output and gives us a clearer picture of that receiver’s importance to the passing game expressed as a percentage. Targets have the highest correlation year-to-year for fantasy simply by acknowledging how involved a player will be and how much percentage of the passing pie they get. While we cannot predict usage fully, it’s important to note that a majority of WR1s need to see upwards of a 20% target share. Anyone seeing close 30 percent is a different stratosphere and almost a near locked-in WR1 finish. However, not every target share percentage is created equal. Seeing close to 20% in the Bills or Titans offense in 2018 still would’ve netted you less than 100 targets. The percentage of the volume matters and the competition is what we will focus in on. For a more in-depth look at WR targets and how market share breaks down league-wide, check out the recently published WR Targets and What We Know for 2019.

Catch Rate- The catch rate shows how many of those targets get converted into receptions. This statistic is not as “sticky” as others with some year-to-year fluctuations. For instance, Amari Cooper has basically yo-yoed through his first 4 seasons seeing catch rates of 55.4%, 62.6%, 50%, and sky-rocketing to 70.1% aided by a change of scenery to Dallas. Predicting those ebbs and flows is definitely a challenge.

We also have to take into account the type of routes run by WRs. Matt Harmon’s Reception Perception data found in the Ultimate Draft Kit gives you a better picture of the route tree of each WR. For example, Michael Thomas led the league with an 85 percent catch rate make sense given his penchant for short to intermediate routes paired with hyper-accurate Drew Brees. Compare that with the routes Antonio Brown ran and the large volume that came his way and you can see that his sub-62 percent catch rate is actually nothing to shy away from. Here were last season’s top-10 in catch rate with a minimum of 95+ targets.

I chose that threshold as only 6 players have finished with less than 110 targets and a WR1 finish in PPR leagues over the last 11 years. That means roughly 97% of the WRs that crossed the top-12 territory needed that type of volume to see WR1 production. The rest were extreme outliers with insane TD rates such as Marvin Jones in 2017.

Receptions- In order to project a player’s fantasy finish, we need to see the possible range of outcomes and if you live in a PPR league, you know receptions drive so much of what your WRs do. In PPR leagues, this is how to find undervalued target mavens such as veterans Julian Edelman and Larry Fitzgerald. As I stated earlier, projecting how a WR converts receptions from their targets isn’t an exact science. However, the goal of this series is to reveal a range of outcomes and not just one median projection. 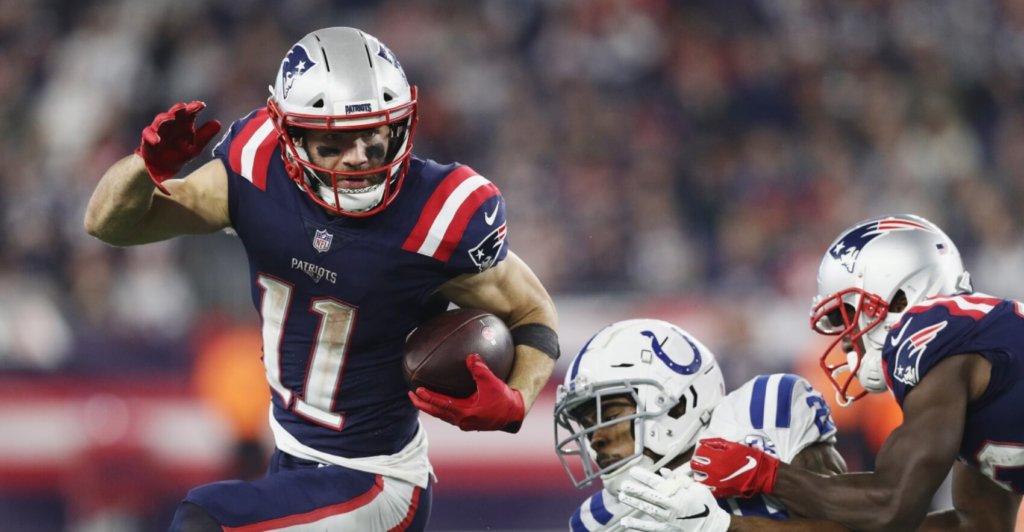 For instance, if we look at the Oakland Raiders offense, how much volume does Antonio Brown need to repeat yet another WR1 season? We take the offensive system, the trends, and the QB to analyze how big of a pie we’re working with. The Raiders are due for some WR love in 2018 as the team acquired Antonio Brown and signed Tyrell Williams to bolster out their formerly anemic group. Their 51.1 percent team WR market share was absurdly low compared to where they’ve been in the Derek Carr era. It’s not hard imagining AB seeing upwards of 140 targets and sitting at 100 catches if he stays healthy.

Yards- Yards are another volatile statistic especially when you start using yards-per-catch (ypc) statistics to plug-and-play from previous years. There is variance. Changing a WR’s ypc even by a yard can be the difference between a 1,000-yard season like Tyler Boyd or Jarvis Landry‘s 976 despite the fact he saw 41 more targets than Boyd. When it comes to projecting yardage totals, we’re trying to highlight a healthy range based upon the team’s total pass attempts and the historical data from previous years.

What we can say about yards is that the higher the amount, the more touchdowns we can expect and candidates who are due for more TDs in 2018. Last year JJ Zachariason highlighted this showing how Julio Jones’ TD output was basically begging for a positive regression based upon his yardage. For most of 2018, we saw Jones disappoint owners before going on a second-half TD tear earning him the nickname Julio “TD” Jones on the podcast. Eventually, things even out.

aDOT & Air Yards- Created by ESPN’s Mike Clay, the average depth of target (aDOT) is one of the better predictive metrics for WRs, especially over catch rate and yards per target. The depth of a receiver’s route is entirely about the pass-catcher and not dependent on the QB. If a WR runs a deeper route and is targeted by the QB, he has the opportunity for more yards. Sounds simple but remember, yards are more indicative of TDs despite the fact outliers such as Calvin Ridley and Tyler Lockett happened in 2018. As Danny Tuccitto of Intentional Rounding points out, aDOT also stabilizes fairly quickly for WRs at only 10 games. For instance, a WR like Kenny Stills has routinely seen his aDOT push above 14 since his move to Miami. He has been consistently targeted down-the-field and therefore projecting within this range helps us with a piece of the puzzle in figuring out his yardage totals.

Another relevant metric in the family of aDOT is Air Yards. Essentially, think about Air Yards as the number of yards from point of release of the QB to the catch point. Air yards can easily be calculated by taking total passing yards and subtracting Yards After the Catch (YAC). According to Josh Hermsmeyer, creator of AirYards.com, “when it comes to forecasting football players, the thing we are best at projecting is volume — carries, pass attempts, targets. Fortunately, volume correlates very well with fantasy points.” He adds in an interview at 4for4.com, that “if a player is getting a lot of targets and there are a lot of Air Yards behind those targets, but he has put up terrible games in terms of fantasy points, we should expect a rebound in the near future.”

What air yards tell us isn’t necessarily how far the ball traveled in the air but the yards a receiver could’ve gained if he caught the ball. For instance, John Brown‘s end of season yardage total (717) looks kinda sad and a bit disappointing especially if you pounced on him after an early season hot start in Baltimore. However, he actually ranked 8th in the league at 1,559 Air Yards. What this tells us is that Brown left a ton of yards on the field as his catch rate (43.3%) was low due to poor targets from Lamar Jackson and Joe Flacco. Air Yards aren’t a measure of how much distance the ball actually traveled. Instead, they measure the prospective yards a receiver would have produced if he caught the ball and then was immediately tackled. In other words, they are a measure of intentions, which for fantasy is where we can start our projections.

TDs- Last but certainly not least is touchdowns. I wish I had a secret formula or years of data to prophesy this all-important category that makes or breaks your week. But finding the end-zone and predicting it is a fickle chore. As stated earlier, yards are a helpful marker towards projecting TDs for WRs. However, according to FantasyLabs, the Yards per TD rate has steadily declined over the last decade. So how do we project TDs?

You start with a healthy mix of analyzing the offensive system, the QB’s TD rate, and the number of total team TDs you have to play around with. Did you see Bears rookie Anthony Miller with seven TDs while the supposed alpha on the team (Allen Robinson) end up with only four? There needs to be some variance in play. Some players are destined to hover around double-digit TDs (Davante Adams) while others have shown that 6 or 7 TDs is their relative ceiling such as T.Y. Hilton and Keenan Allen.

We will be unveiling a different WR1 candidate each week over the course of the month of June and July.  Let us remember that projecting a ceiling for a player is assuming a lot and all of the variables involved from point of release of the QB to the catch point of a WR can change drastically. Stay part of the conversation and let us know which WRs you could see make a tier jump and a draft day value.