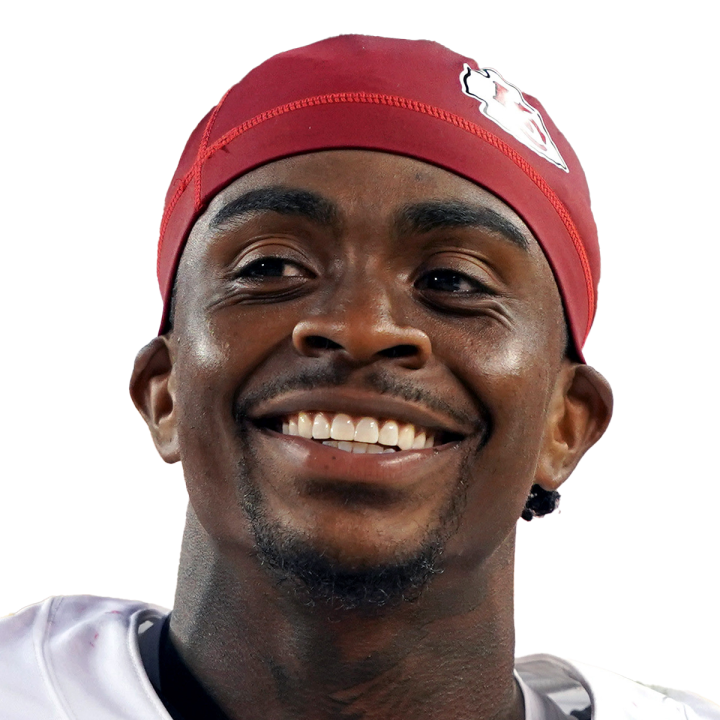 For four straight weeks, McKinnon has dealt with a number of health concerns, but a strained hamstring is the issue that has followed him into Week 13 prep. After sitting out practice both Wednesday and Thursday, he handled every rep at Friday's session, thus clearing him to be available to the Chiefs backfield Sunday. However, McKinnon won't have much more than a complementary role behind Isiah Pacheco, which has amounted to seven carries for 26 yards, 10 catches (on 15 targets) for 82 yards and no touchdowns over the last three contests.

Hardman (pelvis) was listed as a non-participant on Wednesday's estimated practice report.

Toney (ankle/hamstring) was listed as a non-participant on Wednesday's estimated injury report.

Listed as DNP on Wednesday

Smith-Schuster (knee) was listed as a non-participant on Wednesday's practice estimate.

Mahomes (ankle) was listed as a full participant on Wednesday's practice estimate.

McKinnon rushed four times for one yard and brought in two of four targets for 17 yards during the Chiefs' 23-20 win over the Bengals in Sunday's AFC Championship Game. He also recovered a fumble.

Contributes as pass catcher in win

Pacheco rushed 10 times for 26 yards and secured five of six targets for 59 yards during the Chiefs' 23-20 win over the Bengals in Sunday's AFC Championship Game. He also returned two kickoffs for 45 yards.

Kelce secured seven of eight targets for 78 yards and a touchdown and committed a fumble recovered by Kansas City during the Chiefs' 23-20 win over the Bengals in Sunday's AFC Championship Game.

Best game yet as Chief in win

Valdes-Scantling brought in six of eight targets for 116 yards and a touchdown during the Chiefs' 23-20 win over the Bengals in Sunday's AFC Championship Game.

Mahomes completed 29 of 43 passes for 326 yards with two touchdowns and no interceptions during the Chiefs' 23-20 win over the Bengals in Sunday's AFC Championship Game. He also rushed three times for eight yards and lost a fumble.

Toney (ankle) has been ruled out for the remainder of Sunday's AFC Championship Game against the Bengals. He finished the game with a nine-yard catch on his only target and one punt return for 12 yards.