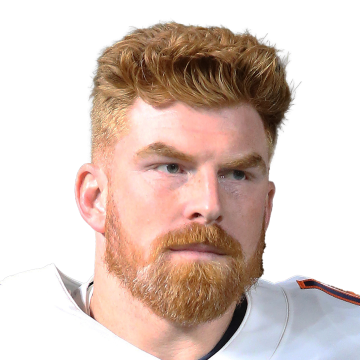 Bears head coach Matt Nagy confirmed Tuesday that Dalton will get the start at quarterback Thanksgiving Day against the Lions, Kevin Fishbain of The Athletic reports.

Dalton slides back into the No. 1 role this week with top signal-caller Justin Fields still tending to a rib injury suffered during Sunday's loss to the Ravens, but Nagy was careful to note that the rookie quarterback remains the team's starter when healthy, per Jason Lieser of the Chicago Sun-Times. To that end, Nagy is hopeful Fields will be ready to start in the Bears' Week 13 game against Arizona, but Fields will likely be inactive this week while Nick Foles presumably steps in as Dalton's backup. After coming on in relief of Fields in Week 12, Dalton completed 11 of his 23 pass attempts for 201 yards and a pair of touchdowns. Dalton draws a juicy matchup this week against a suspect Lions secondary, but he could be operating without one of his top pass-catching options in receiver Allen Robinson (hamstring), who sat out against Baltimore and has yet to resume practicing.

Fields (ribs) hasn't thrown since sustaining cracked ribs during this past Sunday's loss to the Ravens, Jason Lieser of the Chicago Sun-Times reports.

Graham caught two of three targets for 34 yards and a touchdown in a 16-14 win over the Lions on Thanksgiving.

Leads Bears in catches in win

Kmet caught eight of 11 targets for 65 yards in a 16-14 win over the Lions on Thanksgiving.

Mooney caught five of eight targets for 123 yards in a 16-14 win over the Lions on Thanksgiving.

Montgomery carried the ball 17 times for 46 yards and caught all three of his targets for 28 yards in a 16-14 win over the Lions on Thanksgiving.

Dalton completed 24 of 39 passes for 317 yards and a touchdown with an interception in a 16-14 win over the Lions on Thanksgiving. He gained 11 yards on six carries.

Goodwin exited Thursday's game against the Lions with a foot injury.

Goodwin (shoulder) is active for Thursday's game at Detroit.

Robinson (hamstring) is listed as inactive Thursday at Detroit.

Tending to tiny fractures in ribs

Fields, who is ruled out for the Bears' Thanksgiving Day matchup with the Lions, was diagnosed with a few cracked ribs after he recently underwent an MRI, Ian Rapoport of NFL Network reports.