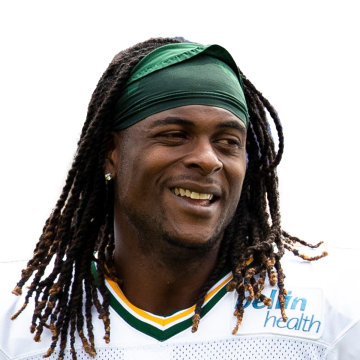 Adams said earlier this season that he is vaccinated, which means his placement on the reserve/COVID-19 list Monday is due to a positive test result. The wideout will need to test negative twice 24 hours apart before being activated, which is unlikely to happen before Thursday's game at Arizona, Tom Silverstein of the Milwaukee Journal Sentinel reports.

It's a tough break for Adams and the Packers on a short week of preparation, and he's now expected to miss his first game of the season. The 28-year-old would need to produce two negative tests by Wednesday to travel with the team to Arizona, while if a second negative test came Thursday he'd need to travel separately. However, Adams is likely to be out of the picture against the Cardinals, so Allen Lazard, Randall Cobb and Robert Tonyan should be more involved in the passing game. Marquez Valdes-Scantling (hamstring) is also a candidate to return from injured reserve this week.

Campbell (illness) was placed on the reserve/COVID-19 list Tuesday.

Rodgers relayed on Tuesday's episode of The Pat McAfee Show that a procedure on his pinky toe remains a possibility. "We're hoping to avoid surgery obviously, but it'd be so minor that I wouldn't miss any time," Rodgers said. "I could have the surgery on Monday or Tuesday and play on Sunday."

Doesn't plan to have surgery

Rodgers doesn't plan to undergo surgery on his fractured left pinky toe while the Packers are on bye Week 13, Ian Rapoport of NFL Network reports.

St. Brown was targeted twice and caught one pass for seven yards in Sunday's 36-28 victory over the Rams.

Not involved in Week 12 win

Taylor did not play a snap on offense in Sunday's 36-28 victory over the Rams.

Deguara was targeted four times and caught two passes for 13 yards in Sunday's 36-28 victory over the Rams.

Lazard was targeted six times and caught two passes for 13 yards in Sunday's 36-28 victory over the Rams.

Valdes-Scantling recorded four receptions on nine targets for 50 yards in Sunday's 36-28 win over the Rams.

Maintains role as lead back

Dillon recorded 20 carries for 69 yards in Sunday's 36-28 win over the Rams. He added five receptions for 21 yards and a touchdown.

Rodgers completed 28 of 45 passes for 307 yards, two touchdowns and no interceptions in Sunday's 36-28 win over the Rams. He added two rushes for zero yards and a touchdown.