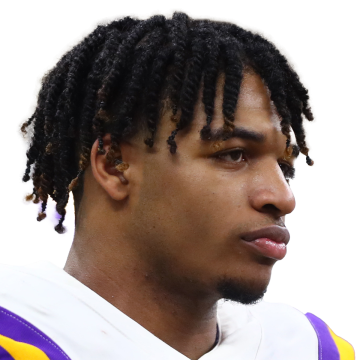 Chase had eight receptions (10 targets) for 201 yards and a touchdown in Sunday's 41-17 rout of the Ravens.

Chase was already on the way to a big receiving day before Joe Burrow dialed up his favorite receiver for an 82-yard touchdown late in the third quarter. The budding star wideout continues to dazzle in his rookie campaign, bringing his season totals up to 35 receptions, 754 yards and six scores through seven contests. If that wasn't impressive enough, Chase's mark of 21.5 yards per catch ranks second in the league, trailing only the Raiders' Henry Ruggs. Fantasy managers should continue riding the gravy train into MetLife Stadium when Chase and the Bengals take on the Jets next Sunday.

Could be limited in practice

Head coach Zac Taylor said Burrow could be limited in practice for the start of Week 14 prep after dislocating his right pinkie finger in Sunday's 41-22 loss to the Chargers, Marisa Contipelli of the Bengals' official site reports.

Boyd secured five of seven targets for 85 yards in the Bengals' 41-22 loss to the Chargers on Sunday.

Chase secured five of eight targets for 52 yards in the Bengals' 41-22 loss to the Chargers on Sunday.

Higgins secured nine of 14 targets for 138 yards and a touchdown in the Bengals' 41-22 loss to the Chargers on Sunday. He also tweaked his ankle during the contest but isn't expected to miss any time, Kelsey Conway of The Cincinnati Enquirer reports.

Burrow completed 24 of 40 passes for 300 yards with a touchdown and two interceptions in the Bengals' 41-22 loss to the Chargers on Sunday. He also rushed once for six yards and lost a fumble, the latter a first-quarter play on which he suffered a a dislocated pinkie finger, Marisa Contipelli of the team's official site reports.

Mixon revealed after Sunday's 41-22 loss to the Chargers that he hurt his neck during the game, Kelsey Conway of The Cincinnati Enquirer reports.

Uzomah had three catches for nine yards on three targets in Sunday's win over the Steelers.