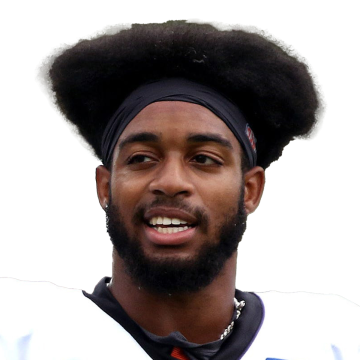 Evans was listed as a limited participant in Wednesday's practice due to a hamstring injury, Jay Morrison of The Athletic reports.

According to Charlie Goldsmith of The Cincinnati Enquirer, Evans was spotted taking part in agility drills off to the side during the open portion of Wednesday's practice, but he apparently joined his healthy teammates on the field for at least part of the session to garner a 'limited' tag. The rookie sixth-round pick is a bit banged up after he was pressed into his largest role of the season in the Week 6 win in Detroit while No. 2 back Samaje Perine (illness) was sidelined. Evans, who carried four times for 18 yards and added three receptions for 49 yards and a score, could have his snaps scaled back Week 7 in Baltimore if Perine is activated from the reserve/COVID-19 list in advance of that contest.

Uzomah had three catches for nine yards on three targets in Sunday's win over the Steelers.

Evans is dealing with an ankle injury and should be considered questionable for Sunday's game against the Chargers, Marisa Contipelli of the Bengals' official site reports.

Responsible for two TDs in win

Burrow completed 20 of 24 pass attempts for 190 yards, a touchdown and an interception while scoring another touchdown on an eight-yard rush in Sunday's 41-10 win over the Steelers.

Chase caught all three of his targets for 39 yards in Sunday's 41-10 blowout win over the Steelers.

Mixon rushed 28 times for 165 yards and two touchdowns in Sunday's 41-10 win over the Steelers. He added four receptions on four targets for minus-2 yards.

Tate (thigh) is doubtful for Sunday's game against the Steelers, Marisa Contipelli of the Bengals' official site reports.

Boyd isn't on the Wednesday injury report ahead of Sunday's matchup with the Steelers, Paul Dehner Jr. of The Athletic reports.