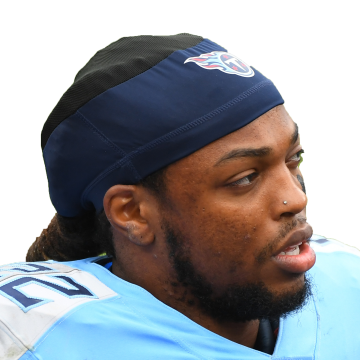 Henry rushed 20 times for 143 yards and three touchdowns in Monday night's 34-31 win over the Bills. He also caught two of three targets for 13 yards.

Henry exploded 76 yards up the middle for the first touchdown of the game, then powered in with a pair of red-zone rushing scores in the second half, including the game-winner with just over three minutes remaining. In doing so, Henry found the end zone three times for the second straight game, and he's now remarkably accomplished that feat three times through six contests this season. With five consecutive outings of at least 110 yards on the ground as well, Henry is off to a monstrous start to the campaign. He'll strive to keep his substantial momentum going in Week 7 versus the Chiefs.

The Titans have designated Jones (hamstring) to return from IR, Jim Wyatt of the team's official site reports.

Rogers recorded one reception on three targets for two yards in Sunday's 36-13 loss to the Patriots.

Westbrook-Ikhine brought in two of five targets for 25 yards and a touchdown in the Titans' 36-13 loss to the Patriots on Sunday.

Hilliard rushed 12 times for 131 yards and a touchdown while also bringing in one of two targets for two yards in the Titans' 36-13 loss to the Patriots on Sunday. He also lost a fumble.

Foreman rushed 19 times for 109 yards, brought in his only target for three yards and lost a fumble in the Titans' 36-13 loss to the Patriots on Sunday.

Tannehill completed 11 of 21 passes for 93 yards with a touchdown and an interception while adding 24 yards on five rushes in the Titans' 36-13 loss to the Patriots on Sunday. He also committed a fumble recovered by Tennessee.

Swaim (concussion) is listed as active Week 12 against New England.

Foreman is expected to receive the "bulk of the carries" for the Titans in Sunday's game against the Patriots, Ian Rapoport of NFL Network reports.

Hilliard is expected to serve as Tennessee's No. 2 back behind starter D'Onta Foreman in Sunday's game against the Patriots, Jim Wyatt of the Titans' official site reports.