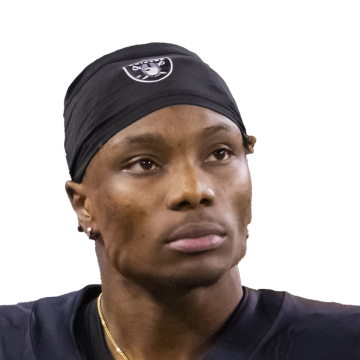 The four targets are a meager total, but Ruggs' 48-yard touchdown in the first quarter put the Broncos at a disadvantage they never recovered from, and it's possible that the Raiders would have gone to Ruggs more if the game had been closer. Derek Carr attempted a season-low 27 passes, and that likely had a limiting effect on Ruggs' target count. While he may never be a high-volume receiver -- his season high in targets is just seven through six games -- Ruggs has been highly efficient in each 2021 game to this point. He's averaging a 40-yard reception every other game, and if his target volume does somehow rise in upcoming weeks, he could tap into another level. In the meantime, though, the crowded pass-catcher rotation of Darren Waller, Bryan Edwards and Hunter Renfrow poses formidable target competition to Ruggs. He faces the Eagles at home in Week 7.