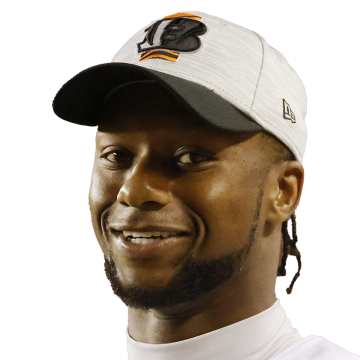 Mixon rushed 18 times for 94 yards and secured five of six targets for 59 yards and a touchdown in the Bengals' 34-11 win over the Lions on Sunday. He also committed a fumble but recovered.

Mixon had a tantalizing matchup in front of him and didn't disappoint, making almost as much of an impact through the air as he did on the ground. The fifth-year back was expected to take on a normal workload despite his recent ankle issues, and Mixon did indeed outpace his nearest position mate, Trayveon Williams, by 12 carries. Mixon's receiving touchdown was an impressive 40-yard scamper early in the third quarter that was partly made possible by an excellent block by Ja'Marr Chase, his first score through the air of the season. The yardage tally on the ground was Mixon's highest since Week 1's 127-yard haul in the overtime win against the Vikings, and he'll look to build on it Week 7 versus the Ravens on the road.

Evans is dealing with an ankle injury and should be considered questionable for Sunday's game against the Chargers, Marisa Contipelli of the Bengals' official site reports.

Responsible for two TDs in win

Burrow completed 20 of 24 pass attempts for 190 yards, a touchdown and an interception while scoring another touchdown on an eight-yard rush in Sunday's 41-10 win over the Steelers.

Chase caught all three of his targets for 39 yards in Sunday's 41-10 blowout win over the Steelers.

Mixon rushed 28 times for 165 yards and two touchdowns in Sunday's 41-10 win over the Steelers. He added four receptions on four targets for minus-2 yards.

Tate (thigh) is doubtful for Sunday's game against the Steelers, Marisa Contipelli of the Bengals' official site reports.

Boyd isn't on the Wednesday injury report ahead of Sunday's matchup with the Steelers, Paul Dehner Jr. of The Athletic reports.

Perine was limited to nine offensive snaps in the Week 11 win over the Raiders. He had two carries for three yards along with three catches for 18 yards.