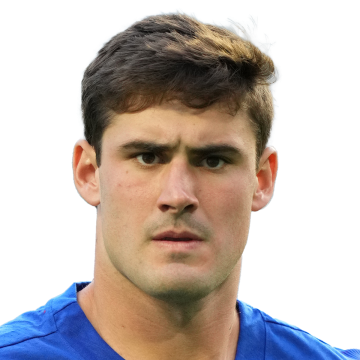 Jones completed 29 of 51 passes for 242 yards with no touchdowns and three interceptions in the Giants' 38-11 loss to the Rams on Sunday. He also threw a two-point conversion pass, rushed three times for four yards and committed two fumbles, losing one.

Jones' final yardage total was respectable enough, but it belied the degree of difficulty he endured throughout the afternoon. The embattled signal-caller was sacked four times and hit on seven occasions overall just a week after suffering a concussion against the Cowboys. Jones also saw his previously modest but tidy 4:1 TD:INT take a serious hit with Sunday's trio of picks, two of which led to Rams touchdowns. The fact Kenny Golladay (knee) and Darius Slayton (hamstring) were out Sunday and Kadarius Toney exited early with an aggravation of his ankle injury certainly didn't help matters, but Jones will look to bounce back with what is likely a short-handed crew to some extent in Week 7 against the Panthers at home.

Looks set for another absence

Jones (neck) is considered likely to miss the Giants' Week 14 game against the Chargers, Ralph Vacchiano of SNY.tv reports.

Golladay was forced out of Sunday's game against the Dolphins with a rib injury, Ralph Vacchiano of SportsNet New York reports.