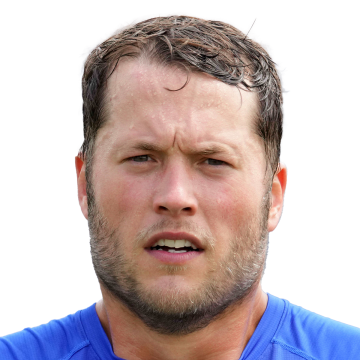 Stafford completed 22 of 28 passes for 251 yards with four touchdowns and no interceptions in the Rams' 38-11 win over the Giants on Sunday. He also rushed twice for 12 yards and recovered his own fumble.

Stafford's target pool was very Cooper Kupp-centered -- the standout receiver logged 11 looks from the veteran quarterback and was responsible for nine of his completions, 130 of his yards and two of his touchdowns -- but Robert Woods and Darrell Henderson also crossed the goal line on scoring grabs of 15 and 25 yards, respectively. Stafford was comfortably in command for most of the contest while averaging 9.0 yards per attempt and authoring his fifth multi-touchdown effort in six games. With a 16:3 TD:INT thus far in his Rams career, it appears safe to say the 33-year-old has undergone a rejuvenation by getting out of Detroit and into Sean McVay's passer-friendly system. Stafford will look to stay hot in a highly favorable Week 7 home matchup against the Lions.

Beckham (hip) is listed as questionable for Sunday's game against Jacksonville after returning to practice Friday as a limited participant, Adam Caplan of SiriusXM NFL Radio reports.

Henderson (thigh) returned to practice Friday as a limited participant and is listed as questionable for Sunday's game against Jacksonville, Adam Caplan of SiriusXM NFL Radio reports.

Could be busy with Henderson iffy

Michel may move into the lead backfield role with teammate Darrell Henderson (thigh) listed as questionable for Sunday's game against the Jaguars, Jourdan Rodrigue of The Athletic reports.

Questionable, but expected to play

Coach Sean McVay said he'd be surprised if Beckham (hip) doesn't play in Sunday's game against Jacksonville, though the wideout will be listed as questionable on the final injury report, Jourdan Rodrigue of The Athletic reports.

Coach Sean McVay said Henderson (thigh) will be listed as questionable for Sunday's game against the Jaguars, Jourdan Rodrigue of The Athletic reports.

Beckham's (hip) status for Sunday's game against the Jaguars is up in the air after he sat out Thursday's practice, Ian Rapoport of NFL Network reports.

Henderson (thigh) was a non-participant at Thursday's practice, Lindsey Thiry of ESPN.com reports.