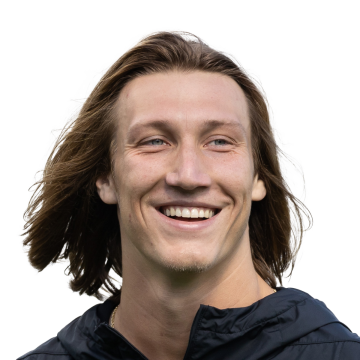 Lawrence saw increased pass volume, topping 34 attempts for the first time since Week 1. The result was the second 300-yard performance of his career, which was highlighted by seven completions of at least 20 yards. The only downside to the performance was lack of touchdowns, and Lawrence has no more than one passing score in each of his last five games. Even so, he's started to look more comfortable with the professional game and has averaged 8.1 yards per attempt across his last three contests.

O'Shaughnessy caught two of six targets for 13 yards during Sunday's 37-7 loss to the Rams.

Shenault caught three of five targets for 30 yards and carried three times for one yard during Sunday's 37-7 loss to the Rams.

Treadwell caught four of five targets for 62 yards during Sunday's 37-7 loss to the Rams.

Jones caught two passes for 11 yards on three targets against the Rams on Sunday.

Lawrence completed 16 of 28 passes for 145 yards against the Rams on Sunday.

Hyde ran for 24 yards and one touchdown on nine carries against the Rams on Sunday.

Robinson ran for 24 yards on eight carries against the Rams on Sunday.

Robinson (heel/knee) is listed as active for Sunday's game against the Rams, John Oehser of the Jaguars' official site reports.

Plans to suit up Week 13

Robinson (heel/knee), who is listed as questionable for Sunday's game against the Rams, plans to try and play, Adam Schefter of ESPN reports.

Robinson (heel/knee) is viewed as a game-time decision ahead of Sunday's contest against the Rams, Ian Rapoport of NFL Network reports.