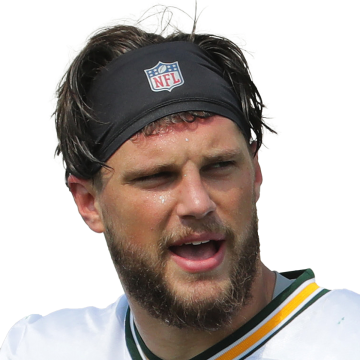 Tonyan has had a muted start to the season, with four outings of two or fewer catches and no more than eight yards. His only somewhat productive outing came in Week 2 against the Lions, when he hauled in all three targets for 52 yards and one touchdown. There's been no indication Tonyan's knee issue is threatening his odds to play Sunday at Chicago, but the next two days of practice could shed light on how he's trending.

Rodgers caught his only target for 14 yards in Sunday's 24-14 victory over the Bears. He also returned two punts for 16 yards.

Tonyan was targeted three times and caught two passes for 10 yards in Sunday's 24-14 victory over the Bears.

Shut out in Week 6

Cobb was not targeted in Sunday's 24-14 victory over the Bears.

Lazard secured three of five targets for 27 yards and a touchdown in the Packers' 24-14 win over the Bears on Sunday.

Jones rushed 13 times for 76 yards and brought in all four targets for 34 yards and a touchdown in the Packers' 24-14 win over the Bears on Sunday.

Adams secured four of five targets for 89 yards in the Packers' 24-14 win over the Bears on Sunday.

Rodgers completed 17 of 23 passes for 195 yards with two touchdowns and no interceptions while also rushing seven times for 19 yards and another score in the Packers' 24-14 win over the Bears on Sunday.