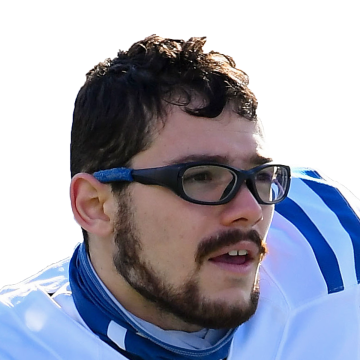 Gets MRI, Week 6 status in question

Colts head coach Frank Reich said Blankenship (hip) underwent an MRI on Tuesday, leaving the kicker's status uncertain heading into a Week 6 matchup with the Texans, Joel A. Erickson of The Indianapolis Star reports. "I'll get the results [of the MRI], and then we'll talk through with [general manager Chris Ballard] what we need to do, whether we need to bring in another kicker, how extensive is the injury."

The Colts already seem to be bracing for Blankenship not being available for Sunday's game, with Ian Rapoport of NFL Network relaying Wednesday that the team worked out kickers Brett Maher and Michael Badgley. Blankenship was clearly limited by the injury in the Colts' Week 5 loss to the Ravens on Monday, telling Stephen Holder of The Athletic that he felt "stabbing pain" in his right hip prior to the contest. Though he proceeded to play through the pain, he missed one of two extra-point attempts, had a 37-yard field-goal attempt blocked and misfired on another try from 47 yards that would have won the game.