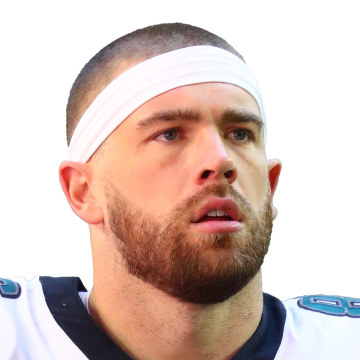 Should be clear top TE in Week 6

Ertz is expected to see an uptick in playing time Thursday against the Rams with fellow tight end Dallas Goedert (illness) unlikely to make it back from the reserve/COVID-19 list prior to the game, EJ Smith of The Philadelphia Inquirer reports.

Goedert was placed on the list Tuesday, after he was revealed to have tested positive for the virus. Because Goedert is vaccinated, he'll be eligible for activation within 10 days, but since he'll still need to be asymptomatic and produce two negative COVID-19 tests at least 24 hours apart, he's doubtful to gain clearance before Thursday's 8:20 p.m. ET kickoff. Goedert's expected absence will likely result in the Eagles running out more three-receiver sets, freeing up Ertz to absorb a large share of the tight-end snaps. While frequently sharing the field with Goedert, Ertz has hovered between 50 and 62 percent of the offensive snaps while averaging five targets through the Eagles' first five games. In addition to likely getting an uptick in snaps, Ertz should be in store for more involvement in the passing game as well, given how stout the Tampa Bay front has been against the run this season.

Leading receiver for Cards in win

Green caught five of six targets for 79 yards and a touchdown in Sunday's 37-14 win over the Browns.

Conner carried the ball 16 times for 71 yards and caught his only target for zero yards in Sunday's 37-14 win over the Browns.