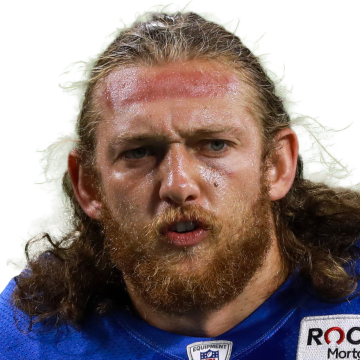 Shut down by Minnesota

Hockenson caught two of three targets for 22 yards during Sunday's 19-17 loss to Minnesota.

With Detroit down its two best offensive linemen, Hockenson seemingly saw increased responsibilities in pass protection at the expense of his receiving production. Even though fantasy managers can't be satisfied with three straight scoreless weeks with less than 50 receiving yards, the return of starting left tackle Taylor Decker (finger) could free Hockenson up to run more routes, and the impending return of Tyrell Williams (concussion) could help take attention away from Hockenson in the passing game. The third-year tight end will next take aim at the Bengals in Week 6.

Jefferson will compete for touches with Godwin Igwebuike as the secondary option out of the backfield behind Jamaal Williams, who is slated to start and fill a lead role Sunday against the Vikings with D'Andre Swift (shoulder) ruled out for the game, Benjamin Raven of MLive.com reports.

Williams is set to led the Detroit backfield this weekend with D'Andre Swift (shoulder) ruled out for Sunday's game against the Vikings, Benjamin Raven of MLive.com reports.