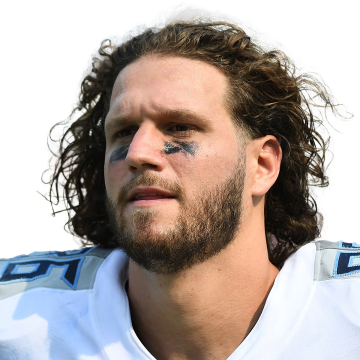 Firkser (knee) wasn't spotted at Thursday's practice and is slated to go down as a non-participant on the Titans' report, John Glennon of BroadwaySportsMedia.com reports.

Even though he was inactive for last week's win over the Seahawks, Firkser has seemingly taken a step back in his recovery from the knee injury. He was able to practice in a limited fashion last Wednesday and Thursday, but he's now sat out each of the Titans' subsequent three sessions. At this stage, Firkser looks unlikely to show enough improvement to suit up this weekend against the Colts, but the Titans will make an official ruling on his status with the release of Friday's injury report. Expect Geoff Swaim and MyCole Pruitt to split work at tight end if Firkser is out for another game.

ACL tear confirmed, out for season

An MRI confirmed Tuesday that Farley suffered an isolated ACL tear with minimal lateral meniscus damage in his left knee during Monday's win over the Bills, Adam Schefter of ESPN reports. He'll require season-ending surgery to address the injuries.

Tannehill completed 18 of 29 passes for 216 yards and an interception in Monday night's 34-31 win over the Bills. He also rushed twice for three yards and a touchdown.

Big in second half

Brown caught seven of nine targets for 91 yards in Monday night's 34-31 win over the Bills.

Henry rushed 20 times for 143 yards and three touchdowns in Monday night's 34-31 win over the Bills. He also caught two of three targets for 13 yards.

Out with hamstring issue

Jones has been ruled out for the rest of Monday night's game against the Bills due to a hamstring injury, Paul Kuharsky of PaulKuharsky.com reports.

McNichols (ankle) is questionable to return to Monday's game against the Bills, Jim Wyatt of the Titans' official site reports.

McNichols (ankle) is active for Monday's game against the Bills.

Rogers (groin) is active for Monday's game against the Bills.

Brown (illness) is listed as active Monday against the Bills.

Brown (illness) is in line to be available for Monday night's game against the Bills, John Glennon of BroadwaySportsMedia.com reports.