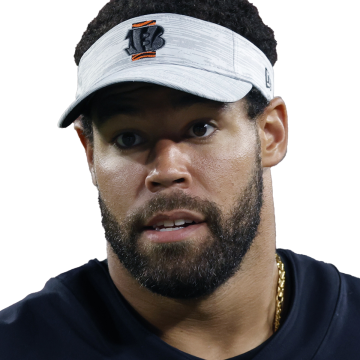 Uzomah secured both of his targets for four yards in Sunday's 20-17 loss to the Bears.

Uzomah played on 73 percent of the Bengals' offensive snaps in Week 2, however, the tight end has not been a big part of the game plan so far this season. The 6-foot-6, 260-pounder is operating as the team's No. 1 tight end, as his teammate Drew Sample only played on 38 precent of Cincinnati's offensive snaps in the contest without being targeted. Uzomah will likely be hard to trust in fantasy lineups this season with a crowded group of pass catchers on the field for the Bengals including Tee Higgins, Tyler Boyd, and Ja'Marr Chase. Consistent usage in the passing game will likely be hard to come by for the 28-year-old. Nontheless, Uzomah will look to get more involved in Week 3 when the Bengals visit the Steelers.

Chase brought in four of six targets for 97 yards in the Bengals' 34-11 win over the Lions on Sunday.

Mixon rushed 18 times for 94 yards and secured five of six targets for 59 yards and a touchdown in the Bengals' 34-11 win over the Lions on Sunday. He also committed a fumble but recovered.

Burrow completed 19 of 29 passes for 271 yards with three touchdowns and one interception in the Bengals' 34-11 win over the Lions on Sunday. He also rushed five times for 20 yards.

Mixon (ankle) is listed as active for Sunday's game against the Lions, Marisa Contipelli of the Bengals' official site reports.

Perine was not activated from the reserve/COVID-19 list and thus will not be eligible to play Sunday against the Lions.

The Bengals did not activate Samaje Perine from the reserve/COVID-19 list meaning Mixon (ankle) is expected to carry the full workload Sunday against the Lions.

Williams has been elevated from the practice squad ahead of Sunday's game against the Lions.

Evans may serve as the Bengals' No. 2 running back behind Joe Mixon (ankle) on Sunday at Detroit if Samaje Perine (illness) isn't activated from the reserve/COVID-19 list by 4:00 p.m. ET on Saturday, Kelsey Conway of The Cincinnati Enquirer reports.

On pace for typical workload

Mixon (ankle), who is listed as questionable for Sunday's contest at Detroit, is expected to handle a "normal" workload this weekend, Geoff Hobson of the Bengals' official site reports.

Will be available Sunday