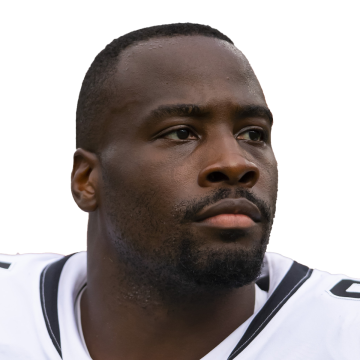 Manhertz wasn't targeted and played only 27 offensive snaps during Sunday's loss to Denver despite the fact O'Shaughnessy went down early with the injury. Luke Farrell caught one pass for six yards while playing 36 offensive snaps and may be the team's new top option at tight end in the passing game. Manhertz should continue to play plenty of snaps with O'Shaughnessy out, but he'll likely continue to see most of his work as a blocker.

Shenault recorded six receptions on 10 targets for 54 yards in Sunday's 23-20 win over the Dolphins.

Jones recorded seven receptions on 10 targets for 100 yards and a touchdown in Sunday's 23-20 win over the Dolphins.

Robinson recorded 17 rushes for 73 yards and a touchdown in Sunday's 23-20 win over the Dolphins. He added three receptions for 28 yards.

Wright will serve as the Jaguars' kicker Sunday against the Dolphins in London with Josh Lambo (coach's decision) inactive for the contest, Mia O'Brien of First Coast News Jacksonville reports.

Lambo (coach's decision) is inactive for Sunday's game against the Dolphins in London, John Reid of The Florida Times-Union reports.

Signs on with Jacksonville

Wright signed a contract with the Jaguars on Saturday, John Shipley of SI.com reports.

Hyde had five carries for 13 yards during Sunday's 37-19 loss to the Titans.

Austin caught all five of his targets for 54 yards during Sunday's 37-19 loss to Tennessee.