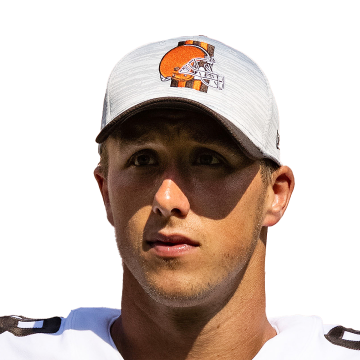 Bryant caught all four of his targets for 49 yards in Sunday's 31-21 win over the Texans.

Bryant was a forgotten man Week 1, slipping behind David Njoku in terms of snaps and targets, but the second-year tight end was more involved in the win over Houston. His first catch was a 29-yard grab that put the Browns in business at Houston's six-yard line, setting up their first score. In terms of snaps, Bryant (31) was on the field fewer times than Njoku (36), but he had the greater impact. The position group as a whole was busy, leading the team with 12 targets, as wide receiver Jarvis Landry lasted only two plays before injuring his MCL. Landry joined the inactive Odell Beckham (knee) on the sidelines, leaving Cleveland without its top two receivers. Landry is expected to miss multiple games, and if Beckham's unable to play next Sunday against the Bears, Bryant and the tight ends may be relied on heavily once again.

Suits up for Sunday's game

Hunt (wrist/knee) is listed as active for Sunday's game against the Cardinals, Andrew Gribble of the Browns' official site reports.

Likely to play through injury

Garrett (knee/ankle), who is listed as questionable for Sunday's game against the Cardinals, is expected to play, Tom Pelissero of NFL Network reports.

IR move not in consideration

Browns head coach Kevin Stefanski said Chubb (calf) won't be placed on injured reserve, and the running back hasn't been ruled out from returning to action Week 7 against the Broncos on Thursday, Tom Pelissero of NFL Network reports.

Likely to have role behind Hunt

Felton is expected to get some touches behind lead back Kareem Hunt (wrist/knee) in Sunday's game against the Cardinals, Tom Pelissero of NFL Network reports.

Should play, uptick in work on tap

Browns head coach Kevin Stefanski said that Hunt (wrist/knee), who is listed as questionable for Sunday's game against the Cardinals, should be ready to handle a larger role than normal with top back Nick Chubb (calf) out, Tom Pelissero of NFL Network reports. "I don't want to kill Kareem," Stefanski said, noting that he has a number of snaps and touches in mind for Hunt.

Not ready to return

Landry (knee) wasn't activated from injured reserve prior to Saturday's deadline for Week 6 transactions and won't play Sunday against the Cardinals, Zac Jackson of The Athletic reports.

In line for increased snaps

Johnson will serve as the second running back on the depth chart in Sunday's game against Arizona.

Ready for lead role, if active

Hunt (wrist/knee), who is listed as questionable for Sunday's game against the Cardinals, is slated to be the Browns' No. 1 running back with Nick Chubb (calf) ruled out, Scott Petrak of the Elyria Chronicle-Telegram reports.