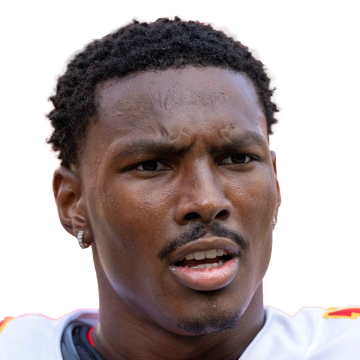 Hardman had five receptions (eight targets) for 55 yards in Sunday's 36-35 loss to the Ravens.

Hardman saw a huge uptick in targets due to the Ravens constantly doubling Tyreek Hill for the majority of the contest. The 23-year-old could have had a much bigger fantasy impact if Patrick Mahomes didn't uncharacteristically overthrow him on a would-be deep touchdown in the first half. Hardman has the pure speed to put up some big numbers in a given week, but he remains behind both Hill and Travis Kelce in the pecking order, so there will be some inconsistency as the season progresses. The Chargers are up next for Hardman and the Chiefs next Sunday.

In line for more work

McKinnon is slated for more touches for at least the next three games after the Chiefs placed Clyde Edwards-Helaire (knee) on injured reserve Tuesday, Blair Kerkhoff of The Kansas City Star reports.

Hill (quad) is listed as questionable for Sunday's game against Washington after returning to a limited practice Friday.

Hill (quadriceps) was back on the practice field Friday, Adam Teicher of ESPN.com reports.

On track for first career start

Williams is on track to make his first career start Sunday against Washington after the Chiefs placed Clyde Edwards-Helaire (knee) on injured reserve Tuesday, Nate Taylor of The Athletic reports.

Will miss another practice

Head coach Andy Reid revealed that Gordon was expected to see around 20 snaps in last week's loss to the Bills, but the wideout limited to eight in his team debut because the Chiefs had to run a hurry-up offense more often than expected, Pete Sweeney of ArrowheadPride.com reports.

Hill won't practice Wednesday due to a quadriceps contusion, Nate Taylor of The Athletic reports.

Not expected to miss time

Hill isn't expected to miss time after he sustained a minor knee injury in Sunday's loss to the Bills, Adam Schefter of ESPN reports.