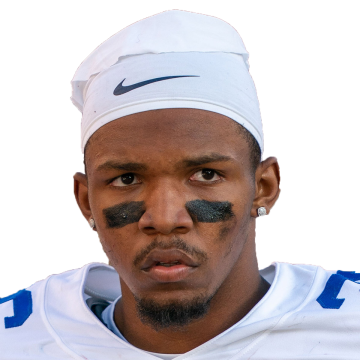 Erupts for 140 yards in win

Pollard carried the ball 13 times for 109 yards and a touchdown and caught all three of his targets for 31 yards in Sunday's 20-17 win over the Chargers.

After the Cowboys' running game got bottled up by the Bucs in Week 1, offensive coordinator Kellen Moore made a point of getting his ground game going in this one. While Ezekiel Elliott led the team with 16 carries, it was Pollard who led in rushing yards, and he scored his first TD of the season on a four-yard plunge midway through the first quarter. Zeke remains the unquestioned starter, but if Pollard continues to capitalize on his opportunities, double-digit touches could become the norm for him. The third-year back's big performance will give the Eagles' defense something else to think about heading into a Week 3 clash back in Dallas.

Diggs (ankle) is active for Sunday's game against the Patriots.

Elliott (ribs) is listed as active Sunday in New England.

Diggs (ankle), who is listed as questionable for Sunday's game against the Patriots, is expected to play, Ian Rapoport of NFL Network reports.

Smith (neck), who is listed as questionable for Sunday's game against the Patriots, is expected to play, Ian Rapoport of NFL Network reports.

Elliott (ribs) is listed as questionable for Sunday's game against the Patriots, David Helman of the Cowboys' official site reports.

Gets in another limited practice

Not close to returning