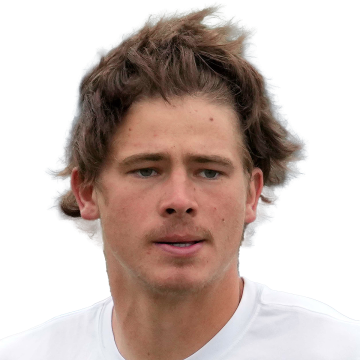 Herbert completed 31 of 41 attempts for 338 yards and one touchdown to go along with two interceptions in Sunday's 20-17 loss to the Cowboys. He also carried the ball four times for 12 yards.

The second-year signal caller again attempted 40-plus passes, but the Dallas defense did a good job limiting Herbert from connecting on any big plays. The star QB spread the ball around to his pass catchers, completing receptions to nine different targets. The two interceptions were unpredictably poor throws from the 23-year-old, as a forced pass to Keenan Allen on the opening drive coupled with an errant pass late in the third quarter at the goal line directly crushed two scoring opportunities. That wasn't the only thing holding back a gigantic fantasy day, however. A 36-yard touchdown pass on a well-designed play to tight end Donald Parham was called back due to holding, a possession that then ended with the aforementioned interception at the goal line. An egregiously poor call on the team's final possession also negated what would have been the go-ahead touchdown pass to Jared Cook, forcing the team to settle for a field goal. Herbert's passing volume on a week-to-week basis almost guarantees a safe fantasy floor, and it wouldn't be surprising if the Chargers are forced into offensive overdrive next week against the Chiefs.

Williams (knee) is listed as questionable for Sunday's game against the Ravens.

Not seen at practice Friday

Jackson (groin) was a limited participant at practice Wednesday.

Williams (knee) was listed as a non-participant in Wednesday's walk-through practice.

Only one catch in win

Cook caught one of three targets for 29 yards in Sunday's thrilling 47-42 win over the Browns on Sunday.

Parham caught both of his targets for 29 yards and a touchdown in Sunday's 47-42 win over the Browns. He also snared a two-point conversion.

Guyton tallied two receptions (on three targets) for 35 yards in Sunday's 47-42 win over the Browns.

Another six catches in win

Allen caught six of his nine targets for 75 yards in Sunday's 47-42 win over the Browns.

Williams caught eight of his 16 targets for 165 yards and two touchdowns in the 47-42 win over the Browns on Sunday.