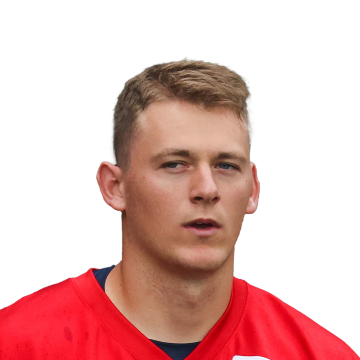 Jones was accurate in the first half, completing 17 of 21 passes for 142 yards to guide his team to a 13-3 lead at the break. He wasn't asked to do much after halftime, as the running game and defense led the way to seal the Jones' first NFL win. Jones has proven to be a capable game manager in his first two contests, but the Patriots prefer to control the clock with runs and short passes as opposed to pushing the ball downfield. The rookie first-round pick has one touchdown and no interceptions heading into a Week 3 visit from the Saints.

Taylor (groin) listed as questionable for Sunday's game against the Cowboys.

Harris (ribs) is listed as questionable for Sunday's game against the Cowboys after practicing in a limited fashion Thursday and Friday.

Harris (ribs) was present for the media-access portion of Thursday's practice, Zack Cox of NESN.com reports.

Harris (ribs) was listed as a non-participant in Wednesday's practice, Zack Cox of NESN.com reports.

Not dealing with significant injury

One catch in Week 5

Harry was on the field for 22 of a possible 64 snaps on offense in Sunday's 25-22 win over the Texans, Mike Reiss of ESPN.com reports.

Bourne caught all three of his targets for 26 yards in Sunday's 25-22 win over the Texans.

Agholor logged 43 of a possible 64 snaps on offense in Sunday's 25-22 win over the Texans en route to catching three of his four targets for 32 yards, Mike Reiss of ESPN.com reports.