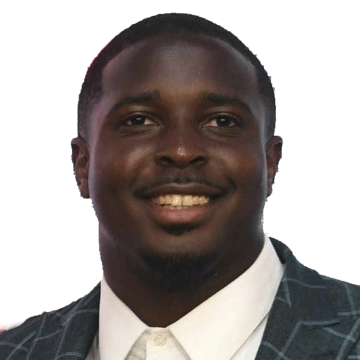 Steps in effectively for Henderson

A non-factor in his first game in a Rams uniform against Chicago last Sunday night, Michel was called upon to helm the backfield versus the Colts when Darrell Henderson went down with a rib injury in the second half. Michel was explosive and efficient with his opportunities, helping Los Angeles kill some clock late. He could be set for a continuation of his fourth-quarter workload in a Week 3 home showdown against the Buccaneers if Henderson is forced to sit out the contest.

Up to six red-zone targets

Higbee caught both of his targets for 14 yards and a touchdown during Thursday's 26-17 win over Seattle.

Michel rushed 11 times for 37 yards and a touchdown and added an eight-yard reception during Thursday's 26-17 win over Seattle.

Jefferson played 39 of the Rams' 67 offensive snaps and caught one of four targets for 16 yards in Thursday's 26-17 win over Seattle.

Jackson secured one of three targets for 68 yards in the Rams' 26-17 win over the Seahawks on Thursday night.

Henderson rushed 17 times for 82 yards and a touchdown while bringing in his only target for 17 yards in the Rams' 26-17 win over the Seahawks on Thursday night.

Boosts yardage back up in win

Kupp brought in seven of 10 targets for 92 yards in the Rams' 26-17 win over the Seahawks on Thursday night. He also returned one kickoff for 12 yards.

Explodes for 365 yards in win

Stafford completed 25 of 37 passes for 365 yards with a touchdown and an interception in the Rams' 26-17 win over the Seahawks on Thursday night. He also rushed once for minus-1 yard.

Higbee is questionable to return to Thursday's matchup against Seattle with a shoulder injury, Curtis Crabtree of Sports Radio 950 KJR Seattle reports.