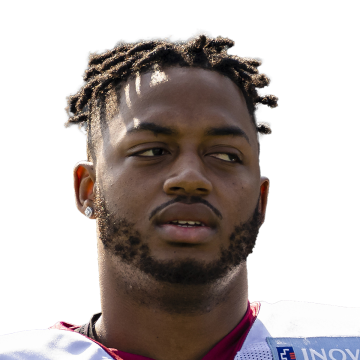 Efficient on ground in win

Gibson rushed 13 times for 69 yards and brought in both targets for four yards in Washington's 30-29 win over the Giants on Thursday night.

Gibson's rushing opportunities were ultimately capped partly by game script despite the favorable matchup, as backfield mate J.D. McKissic ended up seeing quite a bit of work in a frenetic fourth quarter. Gibson still turned in a second straight efficient rushing performance to open the 2021 campaign, giving him 159 yards on 33 carries over his first pair of contests. He also encouragingly remained involved a receiver to an extent and will look to bump his workload on the ground back up in a Week 3 road battle against the Bills a week from Sunday.

Seals-Jones missed Wednesday's practice due to a quadricep injury.

Gibson (shin) was a non-participant at Wednesday's practice, Sam Fortier of The Washington Post reports.

McLaurin didn't practice Wednesday due to a hamstring injury, Sam Fortier of The Washington Post reports.

Patterson took one carry for five yards and caught his lone target for a loss of two yards in Sunday's 31-13 loss to the Chiefs.

Humphries caught one of two targets for a four-yard loss in Sunday's 31-13 loss to the Chiefs.

McKissic rushed the ball eight times for 45 yards in Sunday's 31-13 loss to Kansas City. He added eight receptions for 65 yards.

Heinicke completed 24 of 39 pass attempts for 182 yards, one touchdown and one interception in Sunday's 31-13 loss to Kansas City.