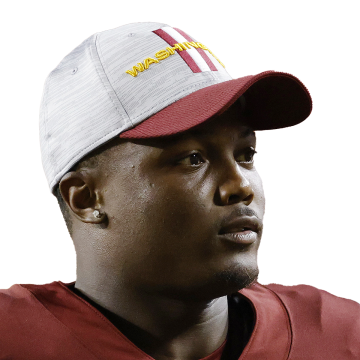 McLaurin secured 11 of 14 targets for 107 yards and a touchdown in Washington's 30-29 win over the Giants on Thursday night.

The speedy third-year man was unsurprisingly Taylor Heinicke's top target throughout the night, and he contributed several key receptions. McLaurin came down with a contested 11-yard touchdown grab early in the second quarter, and he also notched a six-yard catch to move the ball to the Giants' 30 on the offense's penultimate play from scrimmage during Washington's game-winning drive. Through two games, McLaurin has now recorded 15 receptions for 169 yards, and his rapport with Heinicke on Thursday certainly sends him into a Week 3 road battle versus the Bills a week from Sunday with plenty of momentum.

Seals-Jones missed Wednesday's practice due to a quadricep injury.

Gibson (shin) was a non-participant at Wednesday's practice, Sam Fortier of The Washington Post reports.

McLaurin didn't practice Wednesday due to a hamstring injury, Sam Fortier of The Washington Post reports.

Patterson took one carry for five yards and caught his lone target for a loss of two yards in Sunday's 31-13 loss to the Chiefs.

Humphries caught one of two targets for a four-yard loss in Sunday's 31-13 loss to the Chiefs.

McKissic rushed the ball eight times for 45 yards in Sunday's 31-13 loss to Kansas City. He added eight receptions for 65 yards.

Heinicke completed 24 of 39 pass attempts for 182 yards, one touchdown and one interception in Sunday's 31-13 loss to Kansas City.